This week’s article shifts back to the Redbone breed with GRNITECH GRCH ‘PR’ Key’s Outlaw Razor Red. Red may not have the most pups on the ground, as a matter of fact, it’s not even close. He is all the way down in the mid-teens when it comes to number of puppies produced in the breed. But in the other column, the number of titled pups produced, he is alone in first with over 20 more titled hounds than the next in line. Let’s take a look at what he has done.

Razor Red is from a cross that was very successful in its own right. Born in May of 1997, 4 of the 6 hounds in his litter titled out, including Razor Red, NITECH ‘PR’ Lee’s Wild Turkey, NITECH CH ‘PR’ Noss’ So Mt Show Time Molly, and NITECH ‘PR’ Frazier’s Timber Music Goldie. This litter has accounted for 442 pups with 64 hunt titled hounds being produced. 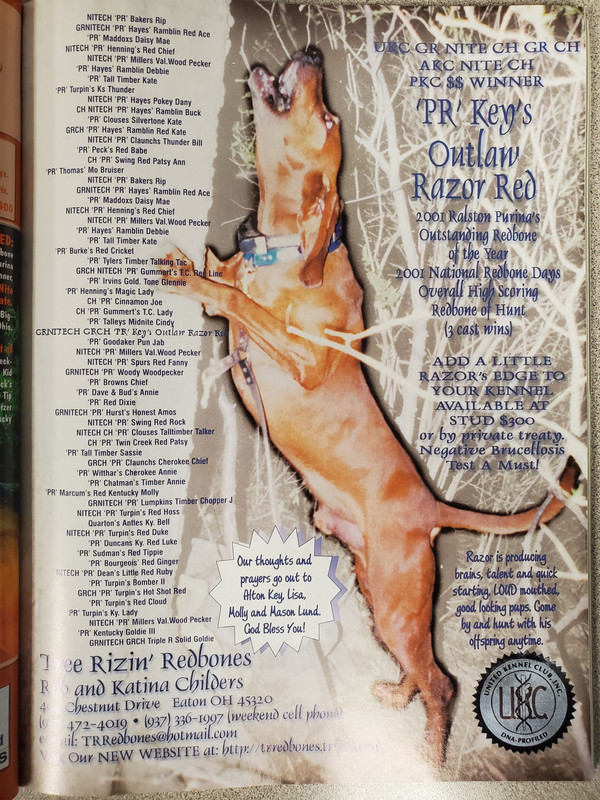 I always wondered how many ancestors do Razor Red and Dawn's Timber Jack have in common. I just got a new pup line bred on Razor Red. Got here from Red Fever Redbones. One of the best pups I bought in over 30 years of running hounds on coon.

Trevor- thank you for this article. Razor was a dog of a lifetime, and we were blessed to have owned and campaigned him. We try to put a litter on the ground every couple of years. Our intention is to Performance Sire Razor for 2023 and hope to have the next litter or two on the ground soon.

We Praise The Lord For Our Success!!