I'm very proud of Earl and Kandy on their wins. This past weekend at the BBCHA Fall Roundup. 2 years ago in Dyersburg Tennessee Earl and I bought Kandy as a puppy from Darren Williams. His female Grand Night Champion Red Stick Ann is Kandy's mother. She won Queen of hunt at Fall Roundup that year. She has been a natural for us since she was 6 months old. I believe her littermates are doing the same. She has won queen of a hunt now twice. She has Four Wins. She definitely isn't perfect and has a ways to go but she is a winner. Thanks again Earl. I wish I could be in the woods with you. You take me along to hear her that's good enough for me. 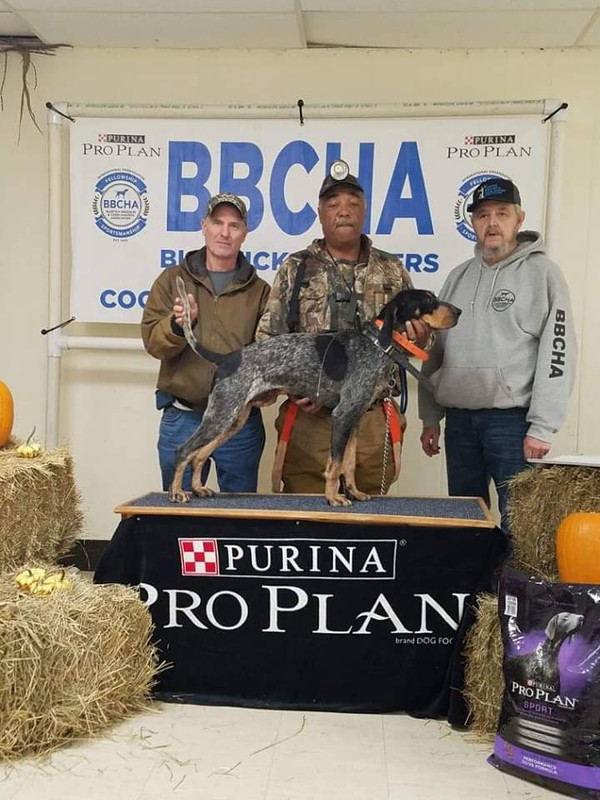 My good friend Terry Estill is in the picture with Earl Howell. This is Friday nights win. I hope to get a picture of Earl for the Queen up soon. 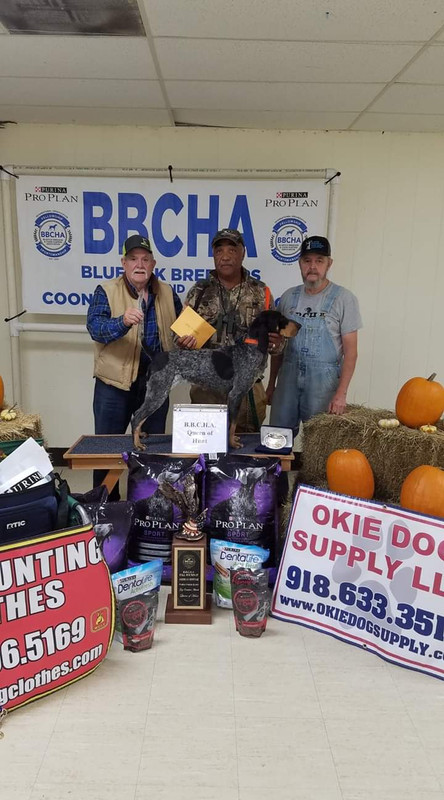 Earl Howell with E&E Salt River Kandy Queen of Hunt 2019 Fall Round UP.


Dall Haden and Bobby Hayes have been a big part of my breeding of my hounds also Bill Bird for help keeping it going.

Elmo, Earl & Kandy. Was a pleasure to hunt with Earl both nights. I told Earl on way back Sat night, You owe me a steak supper for opening my mouth on a long distance 'bad' call Fri night to lose & then Lil being too loose on tree to meet us on coon, so you could win again, but those are the breaks of game. Really enjoyed hunting with them both nights & will plan on hunting with you (them) again, if i get down that way. Or you guys are welcome to slip up here to take a hunt anytime.

I do want to mention Earl, in particular. They have a Cw Fri night & are leading cast Sat night, after Lil takes minus causing her own 'bad break'. I'm bushed from being in woods 4 nights in a row, plus a 9 hr road trip on Saturday to pick up new dog, so i WD. With Earl leading our cast, he offers to WD his dog, so Lil can finish last 30 minutes of cast. I told him, "No way i was letting him do that", because he could still tree coon to get on plus side of board & win Queen. And the rest is history as they say. Roger & Earl scored another coon & Kandy wins the new title. Special thx for offer Earl, but am sure glad YOU stayed in hunt. Take care, Ron.

im so very happy to have met Earl and seems to me it was very well deserved!!!! Elmo it was also great to see you out and about!!! if I was closer I would be dragging you out also!!!best of luck to both of you!!!!